Landslides in the Solar System

We map and study landslides in craters on the Moon and Mercury, and on the slopes of the Valles Marineris, Mars.

Since the early 70’s of the last century, landslides were observed on the surface of the Moon, Mars, Mercury and Venus, to mention only the bodies closest to the Earth. More recently, observations of the NASA’s Dawn probe (http://dawn.jpl.nasa.gov/) revealed that landslides are present on Vesta and Ceres, two asteroids.

Our aim is to understand how the physical properties of the materials on the planetary surface (e.g., the internal friction angle) affect the landslide trigger mechanisms.

Figure 1: Geomorphological landslide inventory map for the study area in the Vallles Marineris, Mars. Scarp areas are shown in yellow, and landslide deposits are shown in different colors.

We classified the landslides in the Valles Marineris using the same landslide types used to map terrestrial landslides (Figure 2). 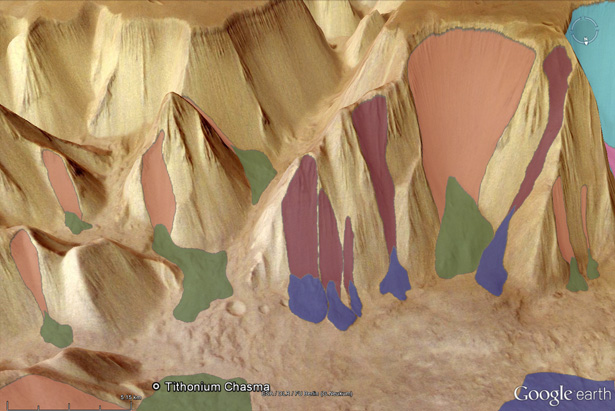 We used our map of landslides in the Valles Marineris to determine the statistical distributions of geometrical variables characterizing the Martian landslides, including landslide area, volume, length, and height, and to compare the distributions with similar known distributions for terrestrial landslides.

Figure 3 shows examples of landslides in the craters of the Moon and Mercury. 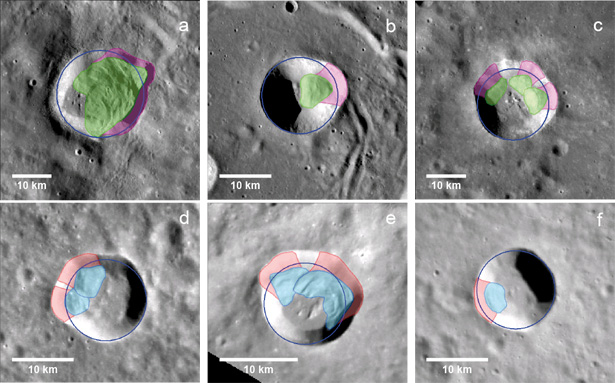 Our statistical analysis of the geometric variables (area, volume, length, height,) of the landslides mapped in the Valles Marineis, on Mars, and the comparison with similar distributions for terrestrial landslides, revealed that:

Using the SSAP simulation program (www.ssap.eu) that evaluates the stability of slopes, we found that deep-seated landslides on Mars can be triggered only by seismic activity, whereas shallow landslides are compatible with the presence of water.

For craters of the same size, slopes in Lunar craters are more stable than slope in the craters of Mercury. We hypothesize that this is an effect of the lower surface gravity of the Moon (1.6 ms-2) compared to Mercury (3.7 ms-2).